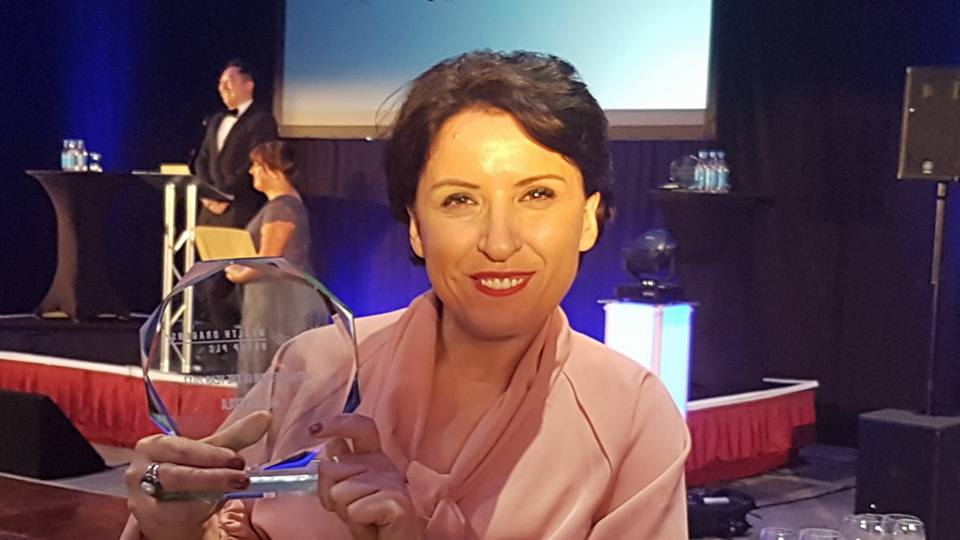 Mirela Sula Receives the “Entrepreneur of the Year” by Wealth Dragons

A packed room of entrepreneurs had been invited to celebrate their achievements with the Wealth Dragons, an empire built over ten years by two successful business people, John Lee and Vincent Wong.

There were several categories where women and men had been nominated for their great work during 2017. Vincent Wong emphasised the need to raise more awareness to create a positive impact in the world, whereas John Lee delivered a moving speech, while recognising many people in the room who had made a lot of progress thanks to the Wealth Dragons programmes.

We at Global Woman were invited as a team to be part of this Gala Dinner and Awards and had the chance to meet so many colleagues and friends who have been part of the Global Woman journey this year. Our founder, Mirela Sula, was nominated for an award in the category of ‘The Entrepreneur of the Year’ and among many other successful entrepreneurs.  And the winner was…… Mirela Sula who thanked everyone involved with Global Woman and most importantly, the members who help to make it the rapidly growing success story that it has become.

In her short speech Mirela said, “What a great way to end the year with such a prestigious award. I love awards, perhaps that’s why they are coming to me” which had everyone smiling.

In fact, Mirela has received many awards for her work, including the ‘Inspirational Award for Women 2015’ for Human Rights, The Best Book of the Year from The Author’s Awards in 2016 for her book, ‘Don’t Let Your Mind Go’, and in 2017, the ‘Best Up-And-Coming Inspirational Influencer’ Award from The Best You, and the ‘Universum Donna Award 2017 from the Universum Academy of Switzerland’. The ‘Entrepreneur of The Year’ Award is the third award for Mirela this year.  Mirela closed her speech with: “Every award is a responsibility that motivates me to work even harder, and I am very grateful for Wealth Dragons who have supported not only me but many women, who have been growing their business with the Global Woman Platform – A big thank you in their name as well”.


We thank you all for your support in 2017 and into 2018. We have many wonderful and exciting things lined up already and you will hear more in the new year. In the meantime, we would like to wish you a very Happy Christmas.

Understanding the psychology behind the brand is what transforms a business
November 25, 2016

Lilli Rohde and Maike Benner – From the Corporate World to Entrepreneurship – How We Found our Path
November 21, 2018