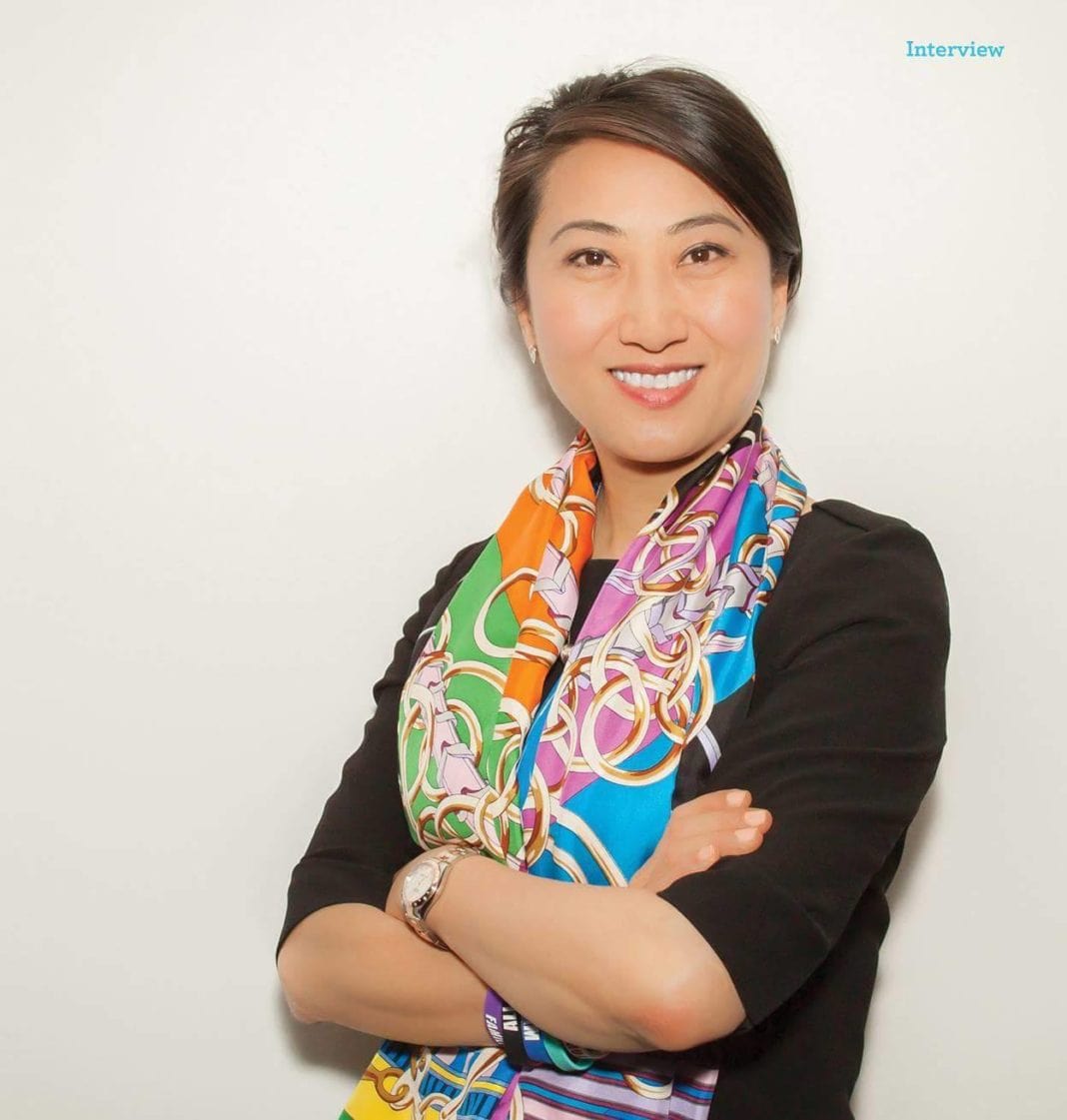 Jin Zhi is a multinational business, investment and property development magnate. She grew up in China, a country where in Jin’s words. “To be able to have free choices is a luxury”. Her father was waiting for a boy to be born, but Jin was the fourth girl out of five sisters. When Jin was born her grandfather said that she was different and this followed Jin through her life. Her story is about how she went from a modest girl to building her own transnational empire in business and travelling the world today.

Tell us about the place where you grew up and your upbringing.
I grew up in northwest China where a number of religions and cultures coexisted, I was sensitive towards different human behaviours under external stresses including religious, geographical and political influences. As a boy everybody was expecting when I was born, in an army hospital near where my father was stationed, I was the fourth daughter of my father’s five children who are all girls. My grandfather, a highly respected man who travelled half of the world when it was torn by many wars in the early twentieth century, looked at me and said: “This one is different”.

The same man said to his only surviving son after the civil war, who is my father: “I have nothing left for you but a straight spine”. This phrase my father told me many times, along with the stories of how almost every generation of his family had travelled the world despite many obstacles, and their contribution to the community no matter what life threw at them. Believing this heritage had led my father to leaving a highly ranked army position to joining a government body in his birthplace.

This was near Yellow River, China’s second longest river serving the local farmers on irrigation, and may have influenced my desire on trekking around the world and serving others. One of my fondest memories is sitting at the back of my father’s bicycle, riding through fields and valleys to my extended families in the remote countryside for my school holidays. I loved my time in the countryside and I learned about the connection between humans and nature, my own experiences with nature, life and death, and the importance of timely hard work. Always a quiet child who loved reading, I once responded to my elder sister: “Oh how I wish to be locked in a bookshop so I read and read and nobody stops me!” after she proclaimed “How I wish to be locked in a sweetshop in a town overnight so I eat and eat and no one stops me!”

“I loved my time in the countryside and I learned about the connection between humans and nature, my own experiences with nature, life and death, and the importance of timely hard work.”

What made you choose to get into import and export and the property industry?
Choice was an absolute luxury and a strange word in China not long ago when I was growing up, we didn’t get to choose, we just got ‘arranged’ and ‘managed.’ The only way to gain some control of one’s life was through studying and sitting in the nationwide university entry exam every summer, the way China was run for thousands of years despite of the changes of dynasties and ruling parties.

I came out of that national exam as the champion of my district, which was a legend then and still is a legend today with my name known among the old and young, about how a quiet girl of a minority ethnic background gained a free education in one of the top universities in Beijing, a ticket to settle in the capital city and a door opener to the world outside of China. Active in the university advocating for the less advantaged groups, and hosting university events for the student union and other societies, I was the only non-Beijing-local who was recruited by the Ministry of Foreign Trade and Economics before my graduation.

Fortunate I was indeed, considering the fact that only a handful of billion-dollar multinationals directly under the Ministry had the license to import and export in the 1990’s when China opened to the world for its free trade. I travelled across the globe on export projects for one of them while I was only in my twenties, and befriended people with great quality who are still a treasure in my life to this day. The skills I learned there helped me to start my own trading business in Dubai and prosper. The connections I maintained from there made it easier when I set up a million pounds sterling manufacturing site in Shanghai from scratch to production, for an English company.

My current UK based global business in high tech material supplying, clearly carries the mark of the first career platform I was on. Property was a choice of my own for its sensitivity to all factors in the market and in human nature, which means I will have to be alert and informed at all times, which excites me.

“I came out of that national exam as the champion of my district, which was a legend then and still is a legend today with my name known among the old and young, about how a quiet girl of a minority ethnical background gained a free education in one of the top universities in Beijing”


Your chosen industry is male dominated and as a businesswoman you might get into situations where you need to prove more. Can you tell us how it’s been for you as a woman in your field?
My immediate thought is that this is not an issue, for I would just perform as the task requires, and challenges such as the deceiving sharks in the property market who will target any victims no matter what their gender. The childhood desire of wanting to be that son of my father, and the habitual effort of pushing for the best out of myself, may have prevented me from thinking on this topic. My continuous humanitarian efforts and charity work involvement in the past twenty years with various organisations, supporting young women, children and less fortunate groups, may have provided me the chance to be open and caring, and the nurturing of my feminine traits in a safer environment, while keeping the business aside to be dealt with separately. While I can’t deny that the inappropriate sexual comment from a director of the company I last worked in is one of the reasons for me deciding to only work for myself from that time on.

I have my own painful bearing of the massive pressure from the societies, and my constant conforming to other people’s expectations of me at the cost of sacrificing my own righteous will. Along with my observation of how young women of my home area and beyond are being hindered by the limiting traditions and the twisted teaching on what they can and should do. Knowing the suffering is passed from generation to generation, has been probing me to fulfil my mission of serving others in my own unique way. I am working on this and working on myself.

“…While I can’t deny that the inappropriate sexual comment from a director of the company I last worked in is one of the reasons of me deciding to only work for myself from that time on.”

How was it living in Dubai for five years and why did you choose to go there?
I left a prestigious job and a home country for Dubai, that’s the love I have for her. Fascinated by its ancient charm with modern appeal, enchanted by the fragrance in the air and the call of prayer, reminded of the Middle Eastern experience of my father’s fathers, I ran towards the abundance of sun, sea and sand, as well as the amazing hospitality that Dubai offered. I had five years in Dubai where people from a great number of countries contributed to her prosperity, and enhanced my understanding of humanity, alongside my studying of extra language skills and cultural insights. My Dubai trading company supplied Chinese goods to buyers in Dubai from all over the world, and assisted government trade missions from China in their Middle East business ventures. The environmental protection sector in Dubai is in my existing clients list of my current high tech mineral supplying business. Leaving Dubai for the UK was for my second degree.

We all have someone we have been inspired by or look up to, tell us more about who inspires you in your life?
My grandfather, Mother Teresa, Einstein, Steve Jobs and now Elon Musk. Life is more than what our eyes can see; we are here to make a difference in our society, for our human race, and the universe we are in.


What’s been your biggest challenge in life and how did you get through it, or are dealing with it?
The attack of my own self-criticism and self-doubting, the guilt after saying no; I am dealing with them by getting rid of the limiting boundaries I was fed and forced into, while keeping the virtues of the cultures and schools of thoughts I once absorbed myself into, and by forming my own system of beliefs and positive world views.


You are an inspirational source for women/girls that might want to get into a difficult industry. What would be your advice to them, and even more to your younger self?
If it feels wrong, it is wrong, do not bend yourself to make it right. Forgive yourself because time is too precious to be wasted on self-condemnation, move on and create your own future against all the odds.


Tell us what your future plans are and how you will achieve them?
Financial gain never really motivates me. It is the greater purpose that set me on fire. I had my stumbles while in search of that bigger purpose.

The future plan is to redefine and resume my pursuit of the greater purpose while growing my transnational empire in business, investment and property. I am confident in achieving this, because I am among the great women Mirela attracts to the Global Woman Club, and I grow and improve everyday. It will involve empowering and educating young women in less fortunate situations and in my home area.

Tags: Women in Leadership
Share This Post
Previous ArticleASK JOHN LEE: I WANT TO QUIT MY JOB AND START MY BUSINESS BUT I AM AFRAID TO TAKE RISKS..Next Article7 Leadership Qualities to Help Women Breakthrough
You May Also Like

I am aligned with influential Artists, Innovators and Leaders
July 21, 2017