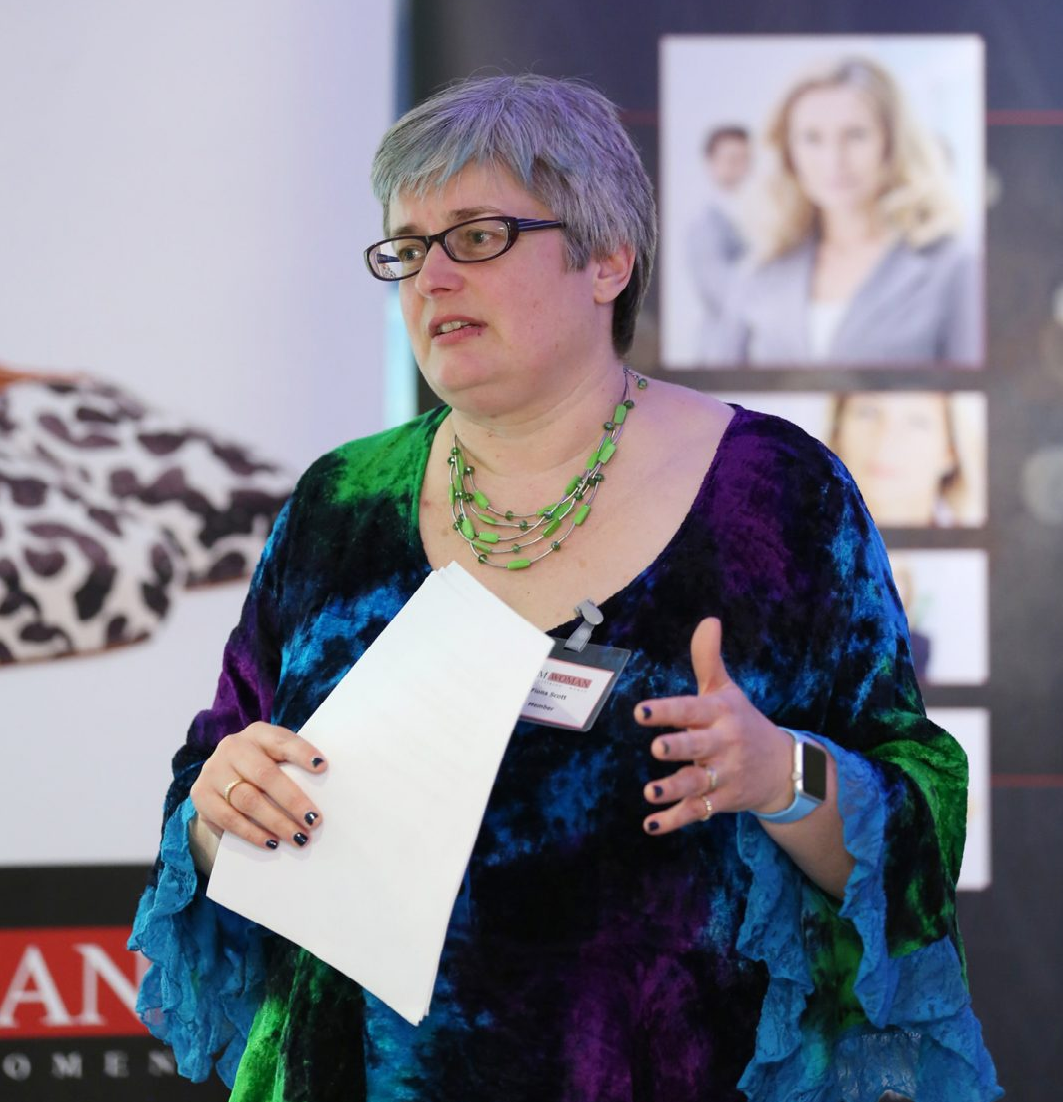 Fiona ScoTt
I always wanted to become a journalist

Fiona’s way to success was paved with challenges and hurdles that she had to overcome. Growing up in a modest British household with her sisters, she only later realised that the gifts she received from her family were worth more than any other tangible object. Love and support from her loved ones provided her with the right amount of motivation to get into college, being the first person of her family to get a higher education. Inspired by a television-reporter back in her teen years, becoming a successful journalist has been Fiona’s dream ever since.

Always being curious and wanting to know more about the world and its people, Fiona started off her career with teaching only to realise very soon that her true passion lies in journalism. People and their approaches to life have always been her passionate interests and at the age of 29, Fiona dared to take the step into the so far unknown but highly attractive field of broadcasting. Several produced series and a successful career in TV broadcasting were the results of this daring decision. Nonetheless, her effort suddenly seemed to vanish when she was told that her projects were to be dropped within the near future. Read the following interview to find out how Fiona managed to successfully set up her own media consultancy and become an inspiring and independent Welsh business woman.

How did you experience your childhood?
I had a very happy loving childhood though we were, in UK terms, a low income household. My father worked as a welder, and my mum stayed at home, as was traditional in the 1960s. I am the eldest of two daughters. We were much loved by our parents and grandparents and knew little trauma. As we got older we became aware of how we didn’t do things other children did such as have foreign holidays, have a telephone or have a car. We also had small Christmas presents. But you only notice this later. I was very lucky as my parents gave the greatest gift in life, knowing how loved you are and how wanted you are. I worked hard at school as my grandad, who was self-taught, told me education was the way forward for our family. I wasn’t great at examinations but I did enough to go into sixth form and to study for a degree at a college of higher education. I was the first person in my family to do this.


When did your fascination for journalism and the world of media evolve?
I decided I wanted to be a journalist in my teens when I met a television reporter in my home town in Somerset. My mum felt this wasn’t for me and I therefore trained to be a teacher after my degree. I was always naturally curious and my granny used to say I was born saying two things: “‘I’m bored” and “Why”. Some might say I’m nosey. That’s fine. I like to get to the truth of things and I’m quite intuitive. However, having qualified as a teacher, I realised it’s one of the hardest jobs mentally so if I could do that, I could do anything. I’d had a little go at writing and reporting in the sixth form at my secondary school when working on a small school magazine but, I remember, working on it really hard and another person who also worked on it (not as hard) got all the glory. I realised then that I need to feel valued or I lose motivation. It’s been one of my learnings in life to overcome this and I no longer feel the need to be ‘seen’ or ‘valued’ by anyone other than those I love. I changed direction and got a job as a trainee journalist in 1988 after applying for hundreds of jobs.

Can you remember your first work experience?
Yes, I worked in a school for children with physical disability. It was rewarding, humbling, very tiring and hard work. I knew from that day that if I was to be a teacher I need fitness as well as mental strength. My first paid job was as a Saturday girl in a department store in Bath, I enjoyed it as I’ve always liked dealing with people.


Starting off with print journalism, what led you to produce several TV series and further on become a media consultant?
I always wanted to start my career in a local newspaper. I believe in the value of community and there are few jobs which allow you to get to the roots of a community than as a journalist. You are privileged to meet people at the greatest highs and lowest lows of their lives and you are a part of that. That’s a privilege. My aim was to qualify at a newspaper and move into television. I also tried radio, by running my own late night radio show for Hospital Radio for two years. After a five year education in print, I started to try for jobs in television. It was not easy. I gave up my precious days off for two years to work for nothing in a TV news room before an opportunity arose. I was offered a post on a lower salary and it was a contract and not a staff job. However by this time I was 29 and felt it was now or never. So I took a risk.

In television my first lesson was that I knew very little about true in-depth investigative journalism, as the law is much tougher on TV journalists than print journalists. I also dreamed of being in front of the camera so it was a huge shock to me to find I wasn’t all that good at it. My voice is very high-pitched which was deemed not fashionable at the time and I had a strong regional accent, also not fashionable at the time. This was heart-breaking. However I also learned I was a strong organiser, great with contributors, very good at interviewing and getting people to be comfortable. This led me naturally to move to a behind-the-camera role and I became a series producer. It meant that I project managed whole series from appointing staff, through to budget management, team management, production management – I absolutely loved it.

In the late 2000s I knew I was probably going to lose my job as the appetite for strong regional TV programmes was waning. I found out for sure this would happen in 2008 for hundreds of us. I had to make a decision; to stay in television meant working miles from home so I decided to set up my own media consultancy and share my knowledge while taking short-term TV contracts to provide some income in the meantime.

I then had to learn how to run a micro business, something I’d not thought about and had no experience of – in fact, something I’d never wanted to do. It took a lot of hard work, knockbacks, dedication and passion but it’s been worth it. I don’t look back in anger, rather with pride of the things I’ve done and the people I’ve worked with.


Has being a woman influenced your career as a journalist in any way?
Not consciously, I’ve never allowed my gender to influence my career decisions. However I have had incidents over the years which have been due to my gender and I’ve dealt with them as they’ve arisen.

You helped to raise the profile of the biggest cooperatively owned solar park in Europe. Would you consider yourself an environment-conscious person?
This project made me really think about the environment. Coming from a working class background where you live hand to mouth, you tend not to look much outside of your own bubble. As I got older I developed more awareness and the solar project brought me into contact with amazing people who have made being green their lives’ work. On a day to day level, I recycle a lot and try to make good food choices. As a journalist I try to be quite apolitical but I’m vehemently opposed to fracking.


What initiated your entrepreneurial choice to open up your own media consultancy business?
Necessity – I had to build something which worked around my family. TV and the media can be very cut throat, competitive and consuming. I didn’t want my marriage to go the same way as so many others. I also had to contribute to the family pot, I was not in a position to be a stay-at-home mum and it would have driven me mad anyway.


Many successful business people struggle to find the right balance between work and free time. How do you manage to spend time with your family as well as your passion of journalism?
I have developed boundaries and I stick to them as much as possible. I keep my family time between 6pm and 10pm and try not to work weekends unless I’m being well paid. I limit evening working to once a week, though that’s not always possible and I always discuss with my family anything which is going to compromise our time together. Holidays are sacrosanct, I don’t interrupt holidays for work and I don’t take my phone or laptop when away with my family.


You have worked with plenty of celebrities in the last several years. If you were to name one encounter, which was the most impressive?
That’s difficult, as the best ones are those which are least expected, like helping the actress Sheila Hancock find a toilet in a building which was a labyrinth, bumping into Bill Clinton during a conference unexpectedly and having a one-to-one coffee with musician Midge Ure, as we were both involved with the same business organisation. Those are lovely moments. I also work with famous faces in the world of antiques and collectibles and I don’t think of them as famous, they are work colleagues and friends.


Is there anything you would change regarding your career choices if you could go back in time?
No – I don’t believe in regrets.


Do you have a personal mission that you want to accomplish in the future?
To be better. To be loved and to love in return. To see my children happy and fulfilled. The rest is a bonus.

Alex Okoroji – ‘Empowering  people with the freedom to be the highest EXPRESSION of their truth’
November 4, 2018