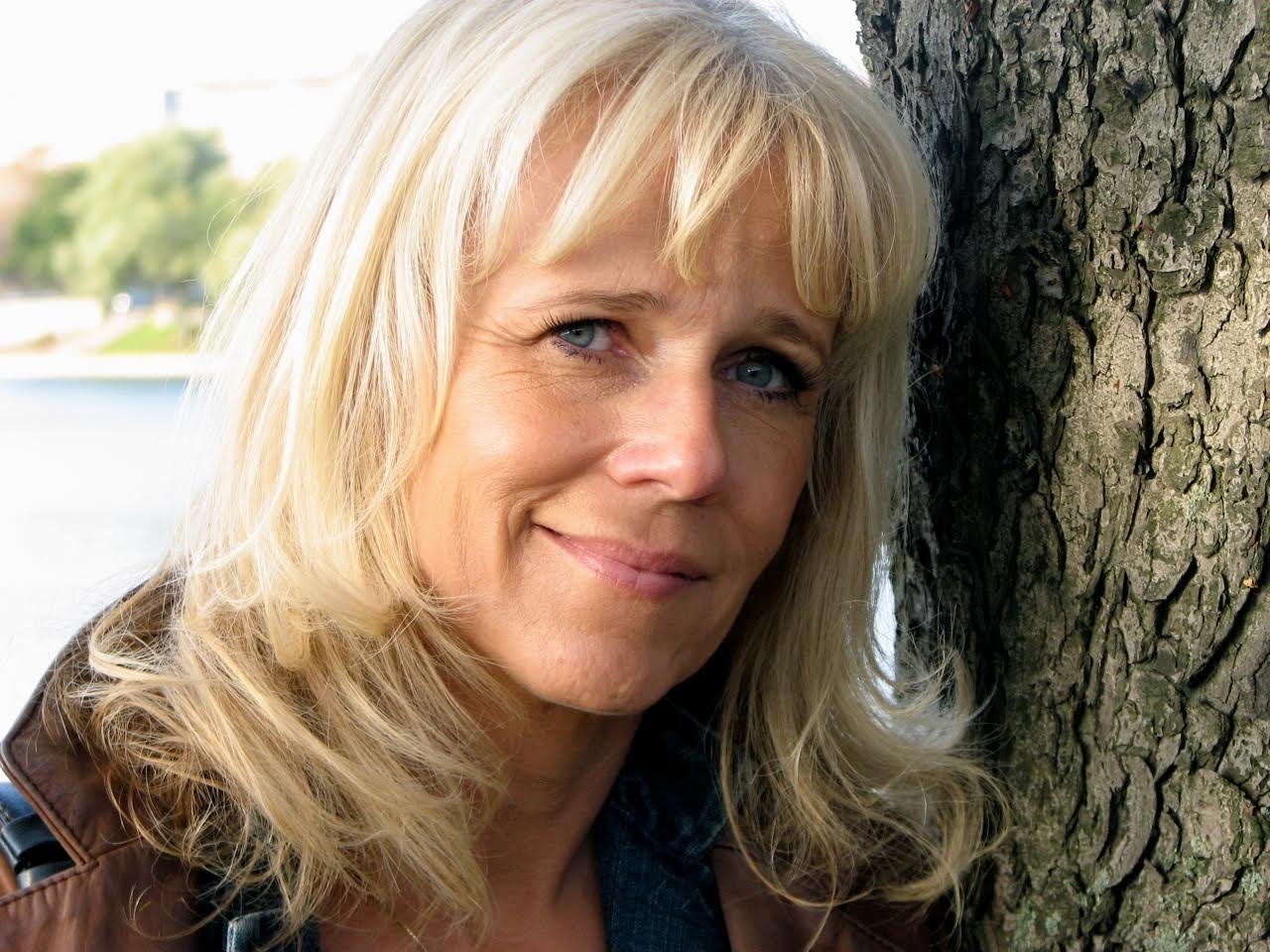 Bente Milton
My Vision About the Pathways Project

Bente describes herself as first and foremost the mother of 5 wonderful children and 5 wonderful grandchildren. Her first child was born when she was18 and the last one when she was 45 and while there is a great span between them age wise Bente says that they are all closely connected.  Her professional background is teaching and filmmaking. She has directed and produced a large number of documentaries, which has been broadcast in many countries and screened at film festivals around the world. “It’s been a great privilege over the years to travel around the world exploring fascinating stories and connecting with all kinds of interesting people” says Bente.  She doesn’t like to leave her children for more than a few days at a time, so her solution has often been to bring them with her. In Bente’s words “It’s been a funny set up sometimes, with production assistants carrying camera equipment alongside with baby equipment, but kids are great travel companions and I think their presence has added an extra dimension to my film work”.

Since 2013 Bente has been collaborating closely with Ervin Laszlo, who is a renowned systems philosopher and founder of The Club of Budapest. CoB is an international Think Tank with many high profile members from the world of Science, Art, Politics and Spirituality, so it is an honour and privilege for me to be part of that group.  Over the past five years Bente has started to explore the new media landscape, and has discovered how virtual spaces can be used for community building and education. In 2015 she became co-founder and CEO of an initiative called “Transition World”. In short it is a catalyser that brings together international organisations, civil society groups, business enterprises, and public institutions ready to seize the opportunity for creating a sustainable transition towards a more humane, equitable, and flourishing world. She is now organising a special event called the Pathways Project, for bringing together leaders from all around the world. Discover more from her interview.

Can you tell us about your Pathways Project – what is this event about?
In September last year, 193 heads of states adopted a set of Sustainable Development Goals (SDGs) to end poverty, protect the planet, and ensure prosperity for all. Each goal has specific targets to be achieved over the next 15 years. The question is: How can we work together across cultures, disciplines and generations to make it happen? Transition World has now teamed up with The Club of Budapest, The Hague Center for Global Governance Innovation and Emergence and the 17 Goals campaign. We will address this challenge in the ongoing Pathways Project and organise a series of 17 interconnected dialogue meetings leading to personal, local and global actions.

The kick-off event will be focusing on SDG 16: “Peace and Justice” on World Peace Day, 21 September 2016. Local and international participants, including young change makers from different cultures will meet with prominent global change leaders for two intensive days to connect, share, learn and plan. Together we will explore how active conflict transformation skills combine with inner peace practices, and define which specific elements we will work on to co-create significant breakthroughs.


How did you come up with this idea?
The journey towards the realisation of this project started 15 years ago, when I made a film called The Fifth Gate. I was travelling around the world exploring ancient prophecies and came across The Hopi Indians of northern Arizona, who regard their ancestors as survivors of a previous global disaster. After the bombing of Hiroshima in 1945 they knew that we were approaching a critical turning point in the history of mankind, and they decided that they had to step forward and share the story of their creation and emergence from previous worlds. They tried for almost 60 years to get access to the political decisions makers. Finally, in 1992, a delegation of four Hopi Elders were invited to speak at the UN where they passed on a warning to the world leaders. Their message was, that if we continue our aggressive and materialistic lifestyle we will set into motion intense conflict and the fulfillment of a host of ancient prophecies. To avoid this the leaders of the world must come together to make peace, protect the planet and honour the fact that we are one family. Back in 1992 the world leaders did not pay much attention to the message from the Hopi Elders, but today, almost 25 years later, the nations of the world have come to agreement on a comprehensive vision, with clear goals and targets, for the development of a peaceful and sustainable civilisation on planet Earth. I consider that to be a major breakthrough.


What is your vision about this project?
Buckminster Fuller – who was an inventor, systems theorist and great visionary – once said.

“You never change things by fighting the existing reality. To change something, build a new model that makes the existing model obsolete.”
What’s needed now in my opinion is to focus all our energy on exactly that. Building a new world, which makes the old one obsolete. An important first step is to bring people together across cultures and belief systems, so that we can achieve a breakthrough in results through collaboration, synergy and implementation. I personally believe that communication and new media is the main key to our success. The internet connects people across the globe, and today’s youth represent the first generation who have grown up with digital technology and spent their entire lives using computers, videogames, mobile phones, and all the other toys and tools of the digital age. Combined with social media platforms, these technologies are rapidly wiring the global brain and supporting the awakening of a new level and quality of collective consciousness. The digital revolution has also enabled us to build virtual models of the world around us, test out hypothetical scenarios, and simulate the real world. So why not use our imagination and technical skills to design, prototype and build a future that works for all? My vision is to create a powerful alliance between young digital natives, innovative entrepreneurs, evolutionary leaders, forward thinking investors and last but not least – indigenous elders who are carrying a wisdom most of us seem to have forgotten.


Who are the main guests that will attend this event and what is your expectation?
I’m amazed to see that so many high profile change leaders, UN advisors, entrepreneurs and media professionals etc. are flying in from the four corners of the world to personally support this initiative. We also have a whole delegation of Global Woman Magazine “Cover girls” attending the event, alongside with the founder and editor in chief Mirela Sula who is a great supporter of the initiative. In addition to that we have the support of a number of large NGO’s. The Goi Peace Foundation and The World Peace Prayer Society have granted a Peace Pole with the inscription “May Peace Prevail on Earth” in 8 different languages to Gribskov, where the event will take place.

In connection with the Mayor’s dedication of the Peace Pole we will organize a flag ceremony with young people from different continents and cultures. I’m sure it will be very compelling. Last but not least we have a line-up of volunteers from the local community and the local refugee centre, who are making an exceptional effort to help us make the event a great success.

How can you define the transition that the world is facing at this stage.
Humanity has entered a time of profound change. We are pushed by necessity and pulled by opportunity. The push is a growing systems crisis, evident in the breakdown of financial institutions, climate disruption, resource depletion, and unsustainable populations. The pull is the opportunity to rise to a new level of human maturity, partnership, and freedom. The combined push and pull at a global scale make this truly a time of profound turning and transformation for humanity.


Why is a peace project so important at this time?
The multiple challenges we are faced with today create fertile grounds for conflict. We need to eliminate the causes of conflict to provide the foundation for a lasting peace. Peace, meanwhile, reinforces the conditions for sustainable development and liberates the resources needed for societies to develop and prosper so it is important to understand that everything is connected. Every single one of the 17 Sustainable Development Goals is a building block in the global architecture of peace. It is critical that we address this challenge from a whole-systems perspective and help each other mobilise the means of implementation. Everyone has a stake and everyone has a contribution to make.


What would be your message for people who are interested to join this initiative?
Since our event is connected to the International Day of Peace, I would like to quote UN General Secretary ban-Ki Moon who says:

“The people of the world have asked us to shine a light on a future of promise and opportunity. Member States have responded with the 2030 Agenda for Sustainable Development… It is an agenda for people, to end poverty in all its forms. An agenda for the planet, our common home. An agenda for shared prosperity, peace and partnership”.

As a personal comment I would like to add that it is wonderful to see that the leaders of the world have a shared vision for the future, but it is up to us – the people of the world – to turn it into reality.

YOU CAN BOOK YOUR TICKET HERE
FIND MORE INFO HERE

"SayYeah" is the UK winner of the HYPE global tech innovation for sports competition
August 11, 2016