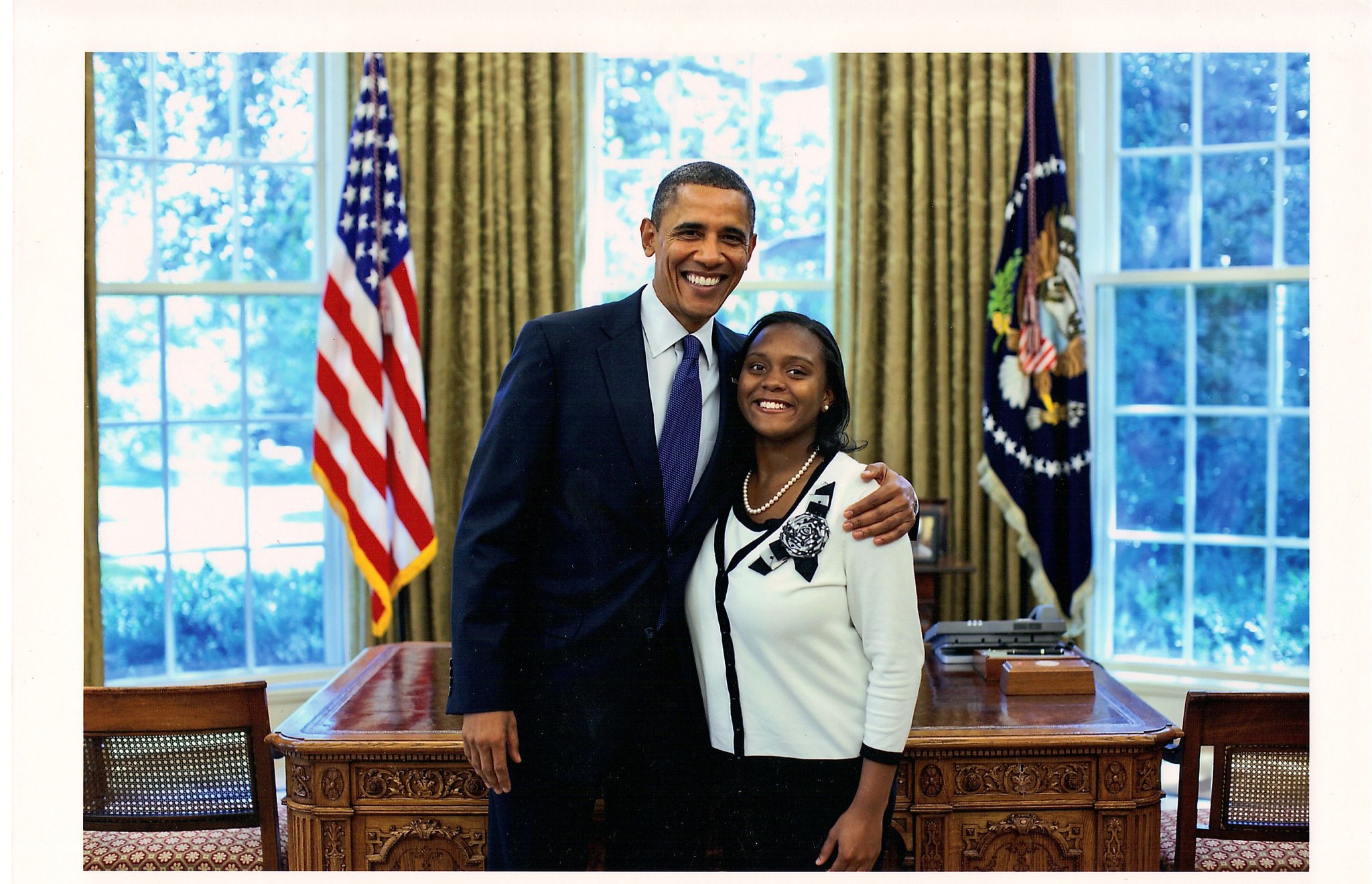 Mona Dixon is not an ordinary woman. As a child, she experienced things, that many of us could not imagine even in scariest dreams. Mona together with her family was homeless for many years, living on the streets and in and out of shelters. However, it did not stop this wonderful young woman. She not only gained education but also by the age of only 18 was nominated one of the “Most Influential Black Women” alongside Oprah and Michelle Obama by Essence Magazine, was recognised by President Obama in the Oval Office, awarded over $100,000 in scholarships, shared the stage with “A” list celebrities and many more achievements that helped her to rise and become an international speaker and inspiration for many people around the world.

Never be ashamed of where you come from because it is that which makes you so strong.

Tell us about your childhood and upbringing. How did it help you to become who you are today and how would it reflect on your future?

Up until I was 13 years old, I lived on the streets, in and out of shelters. I remember sometimes going into dumpsters and sleeping on cardboard boxes because that was the only thing my family and I had
to sleep on. My mom would cover my two siblings and I with her jacket to keep us as warm as possible. I would read my schoolbooks and do my homework under the streetlamp from time to time.

But no matter where we lived, my mom always made sure that we went to school. We would get ready in gas station bathrooms and “trolley-hop” to school sometimes because we did not have enough fare to get on public transportation. We tried to avoid security officers so we did not end up with a ticket that was more than the fare in the first place.

We also did not want to get ourselves or our mom in trouble.

At a young age, I was forced to grow up fast, get a part-time job to help support my family, and focus extra hard on my studies. These things taught me responsibility, to be humble, to be grateful for what I do have instead of what I don’t have, and how to remain focused. Doug E. Fresh once told me that “the main thing is to make sure that the main thing remains the main thing.”

Because of my upbringing, I am strong. It made me into who I am today and I know that I can achieve anything I put my mind to. Nothing is impossible. This mindset carries me every day and it helps me set examples for others.

How did you manage to achieve so much in such a young age?

Things have gotten tough plenty of times and the fire inside of me has at times gotten low, but it has never gone out.

I did not get where I am today without people who went above and beyond to believe in me, push me, and invest in my future. My first-grade teacher, Ms. Mayor, noticed my potential and skipped me to 3rdgrade. My 6thgrade teacher, Ms. Lissner, loved me like her own and

helped me put all my energy into positive things. My high school basketball coach, Mr. Morton, was like a dad to me and always had tough conversations with me. My mentors David Vu and Tonia Smith helped me become National Youth of the Year and win thousands of dollars in scholarships from loving individuals such as the leaders of Tupperware Brands Corporation.

In addition to individuals, I had organisations, including the Boys & Girls Club and UMOM New Day Centers, take me to the next level by providing me with resources and opportunities to become the best version of myself.

And I do not do this often enough, but I have to give myself credit for somehow managing to keep going on. Things have gotten tough plenty of times and the fire inside of me has at times gotten low, but it has never gone out. I always prayed and kept my faith in God. I stayed involved in sports, clubs, and community service activities to help build me into a well-rounded individual.

At 17 years old, I became National Youth of the Year for Boys & Girls Clubs of America and was recognised by President Obama in the Oval Office. Later I was appointed by him to serve as the youngest member of a U.S. Presidential Committee alongside four other distinguished individuals.

At 18, I was also named one of the “Most Influential Black Women,” alongside Oprah and Michelle Obama, by Essence Magazine. This has all led to me being awarded over $100,000 in scholarships, sharing the stage with “A” list celebrities, being featured in the national media, and starring in a national campaign commercial with Mark Wahlberg. I also was a part of a national PSA with other Boys & Girls Clubs of America Alumni, including Denzel Washington, Jennifer Lopez, Mario Lopez, Courtney B. Vance, Smokey Robinson, Sugar Ray Leonard, Shaq, Shawn White, Misty Copeland, Kerry Washington, Magic Johnson, Ashanti, and more! A few years down the road I was featured in my own commercial to raise funds for Boys & Girls Clubs. One of my most memorable moments was when LeBron James made a speech about me and gifted me with a signed shoe on behalf of his Lebron James Family Foundation.

As for school, I graduated from Barrett, the Honours College and the W.P. Carey School of Business at Arizona State University. I went on to get my graduate degree and now at 26, I’m currently pursuing my Ph.D. in Organizational Leadership, while running the Inspired by Mona Foundation, and traveling the world as an international speaker!

Where do you get motivation to move forward?

In the beginning, all of my motivation came from trying to help my family live a better life. On top of that, I am now motivated by the need to lead our young people in the right direction. There are so many problems in our world today that need solutions and it is my responsibility to help them become the best individuals they can become so that they can change the world and live their best lives!

Who is one person that you always look up to?

Even though I went through hard times with my mom (Wakonda Dixon), I have ALWAYS looked up to her. She is resourceful and she is a survivor. She always tried her best and she always kept my family together, and for that I am forever grateful. I also have a dad (Frank Sanchez) who stepped into my life at 18 years old and I could not ask for a better father to guide me in the right direction and provide me with invaluable advice. I love them both with all my heart.

What pushed you to become a member of the U.S Presidential Committee and how old were you when you joined?

My community helped to take care of me, and it was only right for me
to give back where I could.

Since I was a young girl, I always valued helping others. That eventually turned into a love for giving back to my community. Denzel Washington once told me, “You’ll never see a U-Haul behind a hearse. It’s not how much you have but what you do with what you do have.”

My community helped to take care of me, and it was only right for me
to give back where I could. Community service is in my blood and when President Obama appointed me to serve on the Corporation for National and Community Service at 22, I did not hesitate one bit.

By the age of only 18 you have been named one of the “Most Influential Black Women” alongside Oprah and Michelle Obama by Essence Magazine. How does it feel to be compared with such strong and powerful women and why do you think you were nominated?

There are no words to describe being recognised alongside two of the most influential Black women in the world at such a young age! It was a true honor and I feel as though I always have to live up to that role. It motivates me. Maybe one day I’ll meet with them too!

Every year, Essence came out with a Power List. I was nominated because I have started from the bottom, rose to the top, and I bring others along with me in one way or another. That is power!

What is the most memorable moment in your journey?

The most memorable moment in my journey was when I was 17 years old, 4 short years after living in a homeless shelter, standing in the Oval Office with President Obama being recognised for being the National Youth of the Year for Boys & Girls Clubs of America! For once in my life, I was at a loss for words.

What is your mission in this world?

My mission in this world is to accomplish as much as I can so that generations behind me can see what is possible. I want to prove to them that they can be whoever they want to be despite their uncontrollable circumstances. My goal is to empower young people with strong foundations so that I can pass them the torch to continue to change our world for the better.

What would you say to your 10-year-old self, if you would have the chance?

“Little Mo, you are someone special. Everything that you are going

through right now is to prepare you for all the wonderful things you are about to do for the world! You have a light that is going to shine so bright and I don’t want you to dim it for anyone or anything. Use that light to go as far as possible but do not forget to help lead others to their own full potential as well.

Always remain humble, be quick to listen and slow to speak, always seek to understand, and always show love to everyone. Remember that your words are powerful so always use them for good and not evil.

Never be ashamed of where you come from because it is that which makes you so strong. Always have faith and know that trouble doesn’t last forever if you work hard every day to be at least 1% better than you were the day before. You can and will do anything you want in this world! The world needs you to fulfil your greatness! Take action! One day your life will be a movie.”

How automation and technology is impacting the future of business
June 14, 2019

From refugee to entrepreneur-How to deal with life challenges
March 20, 2019

There has never been a better time for women to make the decision
May 9, 2019

Helping women heal broken heart and move on
May 4, 2019