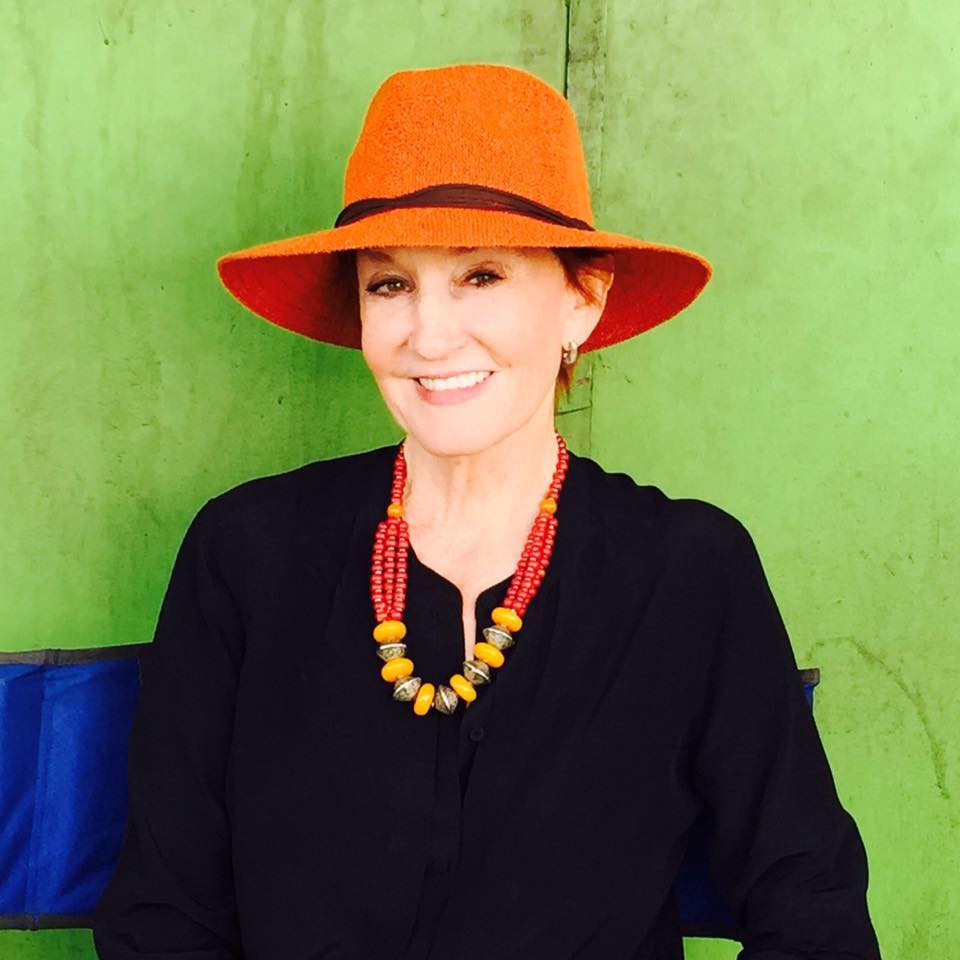 Kathy Eldon
My heart breaks all over again when I see someone facing the grief that I felt when my son was killed.

At the age of 30, Kathy Eldon and her family, including two young children, relocated from their London suburb to Nairobi, Kenya. As a journalist, Kathy was inspired by the stories of the vibrant and creative people she met who were working to build a nation. Following somewhat in her footsteps, in later years Kathy’s son Dan became a photojournalist. While working in Somalia, Dan was killed in a tragic occurrence.

Although Kathy and her family were obviously distraught and devastated by this loss, instead of succumbing to her grief, Kathy became driven to find meaning from what had happened. She has worked on various projects that show the importance of journalists in peace and war and has also taken on ventures to help others who are struggling with tragedy find a new tenacity for life. In this interview Kathy shares how she draws on experiences from throughout her life, whether they’ve been cases of pain or passion, and uses them as inspiration. She supplies advice and support for anyone else who may be struggling with grief by sharing her moving journey.

When you were 30 you and your family moved from London to Nairobi, Kenya. What inspired this migration and what came out of this transition?
Ever since I was an exchange student in South Africa as a 16 year old, I had wanted to return to Africa, and contribute in a positive way. As a young mother of two small children in a London suburb, I found myself terribly frustrated by the narrow constraints of my life so when my husband Mike was offered the job of running a computer company in Nairobi, Kenya, I was thrilled, and so was he. Arriving in Nairobi was an exhilarating experience. It was a time of great optimism – as people contributed their talents to building the nation. I worked for the Nation newspaper as a journalist, and go to cover stories of many of these vibrant, creative, active people, and they inspired me, and my son Dan, who often trailed along behind me as my photographer.


In 1993 you lost your son, Dan, who was working as a photojournalist in Somalia. How did this traumatic event impact you? What action did you take to work through it?
At the age of 21, Dan travelled to Somalia to cover a possible famine. His photos of starving men, women and children, triggered a global response, “Operation Restore Hope,” which saved the lives of millions of Somalis. Dan returned again and again for the next year, working as a Reuter’s photojournalist, covering the famine and a violent civil war. On July 12, 1993, there was a terrible bombing by UN forces under American command of a house where it was believed that the War Lord, “General Aideed” was hiding. Aideed wasn’t there, but at leased 80 innocent people were killed and several hundred wounded. When Dan and his colleagues arrived at the house, having been summonsed by survivors, more than one thousand people had gathered and were watching the retrieval of bodies from the wreckage. Enraged by what had happened, they turned on the journalists, beating and stoning to death four journalists. Dan was 22. As a former journalist, I understood the people’s rage, but was utterly devastated by the death of my son. After a period of total despair, I grew determined to transform what had happened into something positive, at first I wanted to show the importance of journalists in peace and war- and also to illustrate risks taken by journalists to tell stories. My daughter and I began producing documentary films including Dying to tell the Story, focusing on war correspondents; Soldiers of Peace, a film about the Children’s Peace Movement in Colombia; Global Tribe, a series bout social entrepreneurs and Extraordinary Moms, a special about the power of mothers to change our world, featuring Julia Roberts, Christiane Amanpour and then-Secretary of State Hillary Clinton.

You’ve become an inspiration for people overcoming tragedy. What advice do you have for anyone coping with loss?
You can’t rush the grieving process. You have to experience the pain you feel, and allow yourself to heal. During this period, you can seek to find – or often to create meaning in the tragedy that will help you find new purpose for your life. This can be small, like planting flowers or a tree to commemorate the loved one, or creating a memorial, or bigger – like starting a project in the name of the person you have lost, or going on an adventure or exploration that challenges your very being. Whatever you choose to do, try to enjoy the process of creation, or travelling, knowing the truth of a statement Dan introduced to me, “The journey is the destination.”


How do your personal views align with the projects you take on?
I can’t tackle anything unless the projects align with my values. I am fortunate as I launched a foundation that supports the work of “creative activists” like my son Dan, who use media and the arts to trigger awareness and catalyse positive change. So I get to work with an endless stream of dynamic artists, writers, filmmakers and creators of social movements who are literally changing the world around them. It’s an absolute joy for me to be involved with such wonderful projects and projects.


You’ve published books on many different aspects of life, from self-help and cooking to travel and even a memoir. Where do all of these different ideas culminate from and what inspires you to turn these ideas into literature?
Almost every project that I have been involved with has been triggered by my life experience. Aside from a few early social history books for kids, my book projects have reflected my passions, and sometimes, my pain. When I first arrived in Kenya, I realised no one had put together a handbook for newcomers, so I produced “All you Need to Know but don’t know who to Ask,” a compilation of experiences from other new arrivals to make it easier to assimilate to the country. Passionate about cooking and eating, I wrote several cookbooks based on recipes from the best chefs in Kenya, and then tackled an eating out guide that included 360 restaurants – some of which were pretty scary. Together with my daughter Amy, I wrote three “guided journals” to help people go through challenges in their lives, including grieving, finding purpose, and bringing more love into their lives. It worked for us, as we manifested our husbands, who happened to be next-door-neighbours. Now Amy, who has three young children, and I live side-by-side, which is very unusual in America.

After Dan was killed, I emigrated back to America from London where I had lived (including a 10 year stint in Kenya) for more than 30 years. I knew no one, and was wracked with grief.

Some of the books you publish are self-guided journals that you and your daughter Amy write together. What is your relationship with Amy like and how does writing together play into it?
After Dan was killed, I emigrated back to America from London where I had lived (including a 10 year stint in Kenya) for more than 30 years. I knew no one, and was wracked with grief. Amy joined me a year later- and together we worked on Angela Cather, a Journal of Loss and Remembrance, which reflected our grieving experience. Through writing the book, we grew even closer together, and later, as we began to produce documentaries and short films, we had to learn how to work together constructively. Amy is my best friend and muse. Currently we are working on a book to help caregivers looking after someone they love, which is based on our experience helping my husband, who was diagnosed with terminal cancer, but who is still alive and thriving after a horrendous journey to health.


A lot of your work surrounds awakening creative spirits within people and helping them realise their own power. Is there a difference in this process when working with women versus men? What about with children?
I believe there is a creative spark within each individual, and that spark can be used, not only for ourselves, but also for others. We often need examples of other people who are using that spark in unexpected ways to light our own sparks. Men, women and children are all seeking purpose and meaning in lives that often become cluttered and confusing, filed with “should” and “ought’s.” Just coping with the daily stresses of life can mean we push away our dreams and wishes, as we deal with the practical demands that we face. When we move from one city to another, or harder still, from one country to another, we face extraordinary stresses which can extinguish, for a whisk, our inner light.


Are there any challenges you face when helping people come to terms with their loss?
My heart breaks all over again when I see someone facing the grief that I felt when my son was killed. And yet I know that through the pain they are facing, and through the experiences they will have as they go through the grieving journey, they will discover new strength, and purpose. And when they emerge from the dark tunnel that can often seem endless as we traverse it, they will be stronger, wiser, more empathetic and compassionate, capable of seeing and appreciating the world in a new way.


You’ve lived in many different countries including America, England, and Kenya. What does being a global woman mean to you? How does it influence you?
The more we experience life from different perspectives, the more we realise how very similar we are. Most women want the same things: we desire the best for our children, dignified jobs that will enable us to support ourselves, the ability to worship freely and we want to be safe and secure in our homes, neighbourhoods and communities. Being a global soul means we have empathy and compassion for those torn from their homes – realising the truth of the saying, “there, but for the grace of God go I.”

MASTERMIND CLASS: How To Create A Global Brand
January 25, 2018

Mirela Truja: I like to dress the strong woman
December 31, 2017