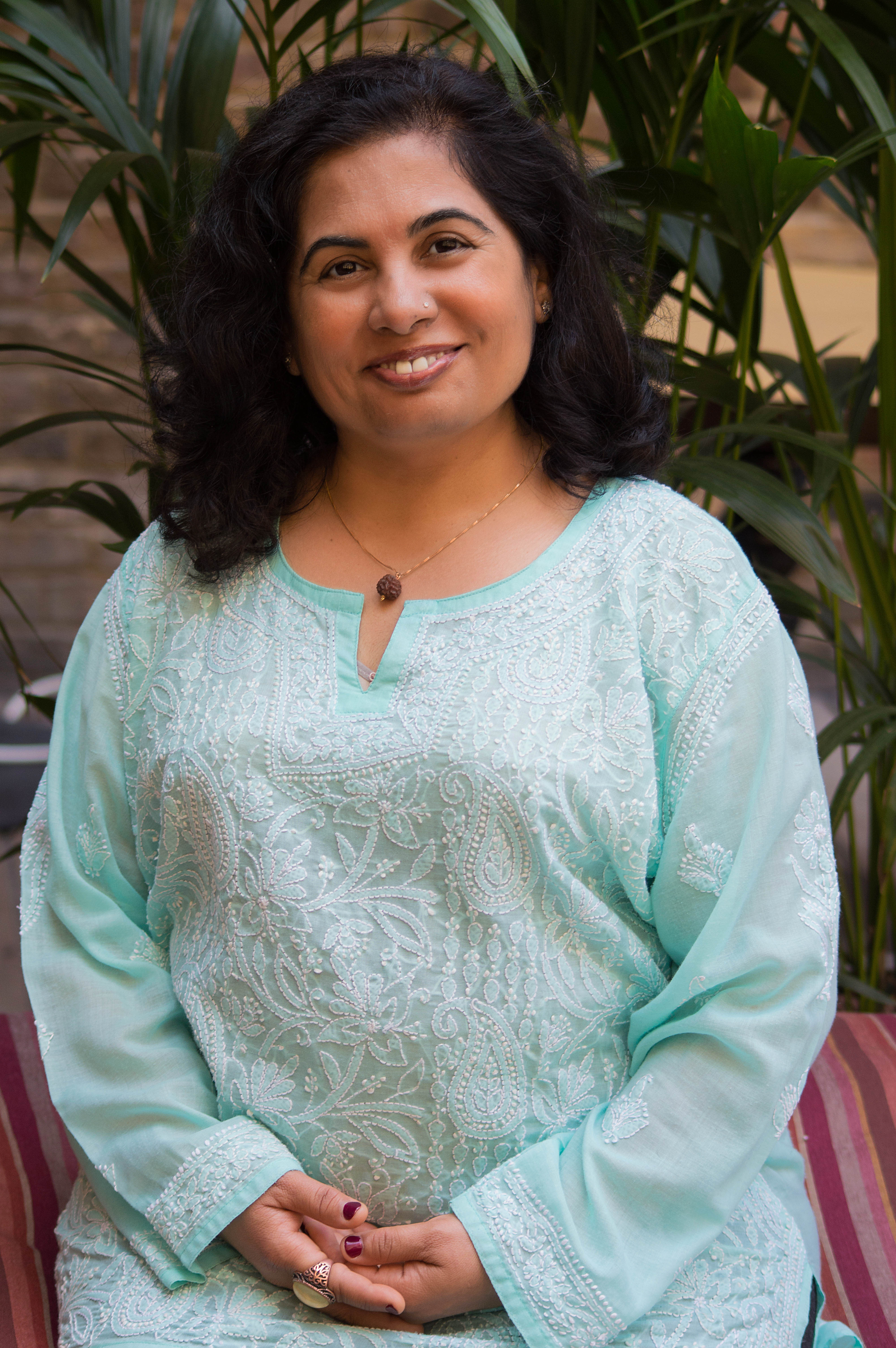 My Story
Seema Datta: “Transitions in the life of a precious woman”

Keyajee ‘the victory of a precious woman’ is the name of my ayurvedic clinic. I have won various transitions in my life until now and looking forward to enjoy more. My journey from a little village with a population of 80,000 people in India to Harley Street in London is becoming my own inspiration. If I can do this, I can do much more! I am on the journey of self-discovery and self-improvement. I want to help other women to win in their life while going through any phase of their transition too. Ayurveda and Creative healing are my tools to do so.

I was born and brought up in a small town near Nagpur, central India. I have always been recognised as calm and quiet since childhood. Being the only girl in the joint family of 3 brothers, I had always been the pampered princess although I used to do my best to help everyone, which would make them love me more.

Just when I was in the final year of graduation, my parents started noticing that I am disturbed at the thought of having a life partner. I told them, I want to be prepared for my life just in case something goes wrong….now I think, it was my intuition that I wanted to be able to earn – it was not so common in India thirty years back, especially in a Gujarati middle class family. My parents allowed me to do that and I went for a course of biomedical techniques in Pune university. I specialised in Pathology techniques so I that I could open my own lab.

I learned so many lessons of life …all positive.

At the age of 22, I got engaged, even before my results came out. I got married with a very energetic, amazing human being who had studied a similar course to mine. We were living in a joint family of 7 brothers living together – 28 members in total, and this is where I learned so many lessons of life …all positive. We were a very good match for each other according to our parents. I agreed with them … we were living well, planning for opening a lab together and then, it happened…. One morning, I took tea in bed for him and when I went back after five minutes, he was struggling to breath, the tea was spilled and I couldn’t figure out what to do. He left us forever while on our way to the hospital.

My father came to me and said, “Now what?” and I replied “I want to be strong enough to win this situation, I want to do something where people know me with my name. I want to learn, and to study more”. This was just the next day after and I was hurt. I was feeling as if I had lost myself, I could see myself as a third person. I had accepted the situation as punishment to some deeds in past lives and was ready to go through it. I was a big fan of my mother-in-law since I got engaged, such a dynamic personality holding a big family together to help them thrive with such positivity and prosperity. She stood up and said, “I will support her to go to college”. Since that day she was my inspiration and protection. All family members agreed without hesitation and I started my studies of Ayurveda three months later.

At the tender age of 22, living in with my in-laws and studying at day-college, it was feeling like success. People were talking about my courage rather than I what I am suffering. I was having more strength to accomplish my vision. As I had already studied BSc, and BMtech, I was able to understand Ayurveda better as a science.

I was getting recognised as a brilliant student, the exams for the first year were done… and then the results came. I was a fail in 5 subjects out of 7! I applied for the re-checking of my papers and got through 3 out of the 5 that I had failed. In second year I failed in 3 subjects. Now I was broke. I was crying and still remember, one of my teachers asking me “Seema, why are you crying?” I told him it was because I had failed. He said, “So what? What is going to change if you cry? Do you want to quit?” and it then clicked with me that crying was not a solution. From that day until today, when things are seeming less favourable and I cry, I remember Dr Khaparde and move along with more determination.

I have been extremely lucky to have the support of my mother-in-law who was a protecting sheath for me on one side, nurturing me with the love I had lost, and also filtering any negativity coming to me from society.

Studying in different circumstances was giving me more sense to start having practical training earlier than waiting to finish the last year. I got an opportunity to join the obstetric and gynaecology hospital near home when I was in the second year. In this hospital I knew all my negative qualities – that I was slow, and I think slow which was not good for a hospital environment. I was not a good communicator. I would cry every day and my sister-in-laws wondered if I should keep going there to only pick up negative things. I wanted to learn from my mother-in-law and she was the best teacher I knew. Today she considers me as her daughter and I am grateful for whatever work I did while working with her. It was the work which gave my life a direction. I wanted to help women to give birth. She made me so capable that I could handle difficult situations in my own set-up, such as when I started in my home town which had only one gynaecologist in 80 villages attached nearby.

I got an opportunity to join the obstetric and gynaecology hospital near my home town when I was in the second year. I was doing well in my clinic, which was getting busier and well known. That was despite my parents opposing it as they wanted me to re-marry and settle again. I was against that as I had found my big vision. My younger brother who had been supporting me, died in a motorcycle accident and.his wife decided to stay with my family with their two little girls, inspired by me. It was at a time when girls would go back to their parents home to settle. I found it very daunting for my parents to see their daughter and daughter-in-law in this situation. I also had to show to my sister-in-law that you have to move forward – so I decided to say yes to marrying again.

I don’t know why but I was confident that I could adjust with anyone, and I said yes to the first person who came along. I got introduced to him after a 3 day interview with my father. I said yes and 15 days later I was married. After another 15 days I knew I was pregnant! It was a scary time for me. I was going to a different country, and I didn’t know the family well and I didn’t understand the person I was married to! Yet I just knew he was the one for me. I am glad today that it has turned out well, as I am living a very happy life with two children now aged 15 and 12.

I am glad today that it has turned out well, as I am living a very happy life with two children now aged 15 and 12.

When I came to the UK, having studied in the English language, I hadn’t had practice in speaking English and I used to stand still trying to understand what the other person was saying. I lost my confidence in communication. Even after all the encouragement and help offered by my family here as well as the Ayurvedic medical association, I decided I didn’t want to speak it until I got better at understanding the accent.

I gave birth to my son in October 2000. My mother-in-law was staying with me to give support but I did find that there is not enough support around for women during pregnancy and postnatal. I started thinking of what could I do. My husband was happy to work for the whole family and I was looking after the children and my mother in law, who was by now suffering from cancer.

I was keeping in touch with the Ayurvedic association, attending conferences and workshops . I started learning computer skills with the help of my nephew. I then began talking about Ayurveda to school mothers in gathering and did some cookery workshops. They enjoyed it and suggested that the way I teach science behind the cooking with Ayurvedic principles, I should do more, so I started teaching them on regular basis in a community centre.

One day I got an email from the Ayurveda association about a conference where Dr Gowri Motha was giving a presentation. When I checked her details, I knew I wanted to be there and went to the conference. After her presentation I met her, and she said that she had wanted to meet me too, so that was meant for us! Dr Motha was thinking of developing postnatal products and had heard me talking about my cookery classes during the lunch break. Soon after I joined as an Ayurvedic consultant in Viveka and this was a real start for my practice in the UK in 2007.

While working with Dr Gowri, I learned a lot and I grew as an international practitioner. She carved me to shine – my basic quality of taking negative comments as a challenge always helped me to grow better – psychologically and spiritually. I am grateful to all my teachers who pick my negative points that feels hard but helps me to grow.

I am grateful to all my teachers who pick my negative points that feels hard but helps me to grow.

During the last two years, I had been feeling too secure while working with Dr Gowri, and feeling still and stuck. My hunger for growth was still there but the feeling of being secure was making me lazy and uncomfortable at the same time. I told that to Dr Gowri and with her blessing I stepped out into the big world to struggle, to learn, and to grow again. I am still working with her but my main focus is the Keyajee Ayurvedic clinic . (Keya means precious flower, Jeet means victory). These are the names of my children but when combined together, it becomes the victory of precious women). It is a new transition in my life and an exciting future.

I Imagine Phenomenal Things Happening And Fixing The Wrongs
January 5, 2017